Despite unending mountains of dishes, I love Thanksgiving. Gratitude is a potent tonic for many ills, and all others can be cured by a good meal with loved ones plus a couple of days off.

What I don’t love is the traditional Thanksgiving menu.

Luckily, no one in my posse complained when turkey was jettisoned for the moister, far tastier roast chicken, and banning marshmallows was a breeze. If only they recognized pumpkin pie as the clammy, odd-textured abomination it is. Squash should be savory. Let’s make a nice soup instead–with a little sage, perhaps–and follow with chocolate.

P.S. I thought I was alone in my lukewarm response to the classic turkey dinner until I read a piece in the New Yorker entitled, “Wonton Lust.” Here’s a brief excerpt from Calvin Trillin’s brilliant essay:

“The Thanksgiving ritual is based on eating, and, in that spirit, I particularly want to give thanks for the Immigration Act of 1965. Until then, this country virtually excluded Chinese while letting in as many English people as cared to come–a policy that in culinary terms bordered on the suicidal…. Naturally, I’d speak during [our Thanksgiving] meal about what Americans should be grateful for. ‘If the Pilgrims had been followed to the New World only by other Pilgrims,’ I’d say to the girls between bites of duck with Chinese flowering chives, ‘we would now be eating overcooked cauliflowers and warm gray meat. So count your blessings, ladies.’” 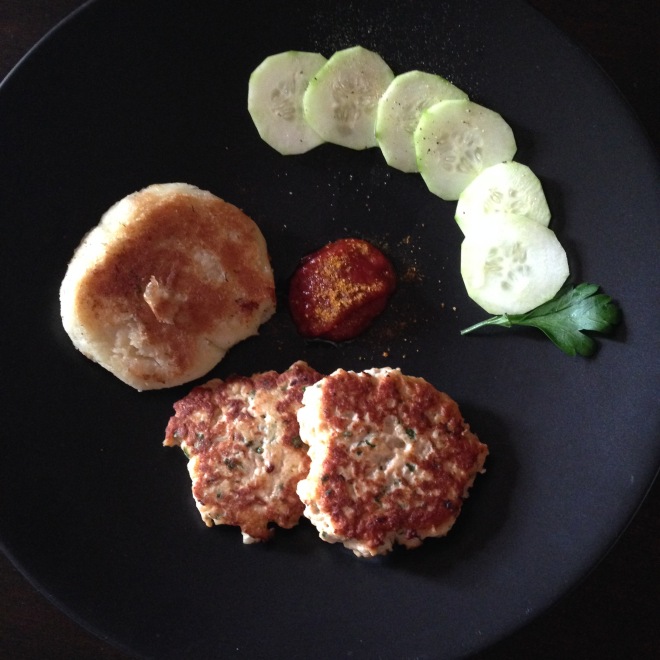 1. Let’s say your mom has been fighting a stupid virus for five weeks now. But instead of lying in bed quaffing Dayquil, she rallied and took you to the beach. She and her pounding sinus headache ran around playing games with you. After that, she took you out for the most amazing ice cream OF YOUR LIFE. Then, while you showered and sat on your butt watching TV, she made a tasty dinner comprised of: mashed potato patties, salmon burgers with lightly curried ketchup (your favorite), cucumber slices with a drizzle of cilantro oil, and even a %*($!! sprig of parsley. When you see your plate, the correct response is:

A) What? Where’s the bruschetta? Weren’t you going to make bruschetta tonight?

A few years ago, I had to take a class that was supposed to be about graphic design, but instead focused on the moral superiority of mindful of food preparation.

Fifteen minutes into the first six-hour class, I had heard more yammering about the meditative benefit of chopping each herb leaf thoughtfully than any parent of two should be required to endure.

Almost reflexively, I heard myself joining the conversation, “That sounds lovely, but if my microwave broke, I would cry.”

Everyone stared as I shifted uncomfortably in my folding chair.

I wasn’t kidding, though. That was the year of chicken nuggets–the only protein my pre-school kids would consume at the time. Who has time to thaw and bake those suckers for 30 minutes when the kids are already melting down? If I could stop the crying in four minutes flat, I was going to do so. Much as I love food, sometimes life dictates that meals be reduced to emergency fuel injections.

I can guarantee that the people who coined the phrase “slow food movement,” never stopped by my house in the late afternoon. It’s not only my kids who melt down, either. Just ask the college friend who traveled with me for seven weeks one summer. After a few days with me, she started shoveling snacks my way every 40 minutes–no doubt for her own self-preservation. Let’s face it, at 5:30 pm, the only coherent thought I’m capable of forming is: GOOD GOD, LET’S GET SOME FOOD ON THE TABLE, PEOPLE.

Somehow, all of my antagonistic feelings about hippy-dippy, artisanal, homegrown, hand-ground, infinitesimally slow food items have been channeled toward Mollie Katzen and her cavalcade of Moosewood cookbooks.

I blame this on the Enchanted Broccoli Forest, a recipe I tackled once fifteen years ago. Imagine a vegetarian version of Midwestern hot dish with broccoli stems poked in like trees. Bland. Floppy. Nothing forest-y about that hot mess, and no tater tots or Durkee fried onions to offset the disappointment.

I suppose there are many reasons why I should love the Moosewood cookbook, I just can’t think of any at the moment. I do know what I don’t like, however:

There is an ungodly amount of cheese in there. All kinds. Especially cottage cheese, which is foul.

There are no photos, and I know why. Hippie food is ugly.

Stupid, stupid 63 ingredients in every dish. I blame Mollie for the jar of asafetida that sits in my spice cupboard. Does everything need to be so darn complicated? Each recipe takes a million years. Maybe y’all plan your meals a year in advance. Not me. News flash: at 5:30, I will not be soaking anything overnight, nor will I be driving from co-op to co-op looking for dried mint and a half an ounce of tree ears.

What the *()$%! is Noodle Kugel, besides grounds for divorce? Who puts noodles in dessert?

And what about Scheherazade Casserole? Is the cook slain after serving it, or is she saved by reading aloud the long-winded recipes?

Which reminds me, it is exceedingly wordy.

We played a little game the other night. Whoever was “it” would choose a particularly odd recipe, and everyone else would try to guess the ingredients. FYI: when all else fails, try “cheese” or “seeds” or “more cheese” or “raw bulgur.”

Here’s the main problem, though. It looks like a cookbook for nice people.

Little swirly things nestled between sections, sketchy drawings of seraphim and urns and trellises and lots of leaves that prefer to be carefully, thoughtfully, individually chopped.

And there is that cloying, lovingly handmade font. Given the date of publication, maybe the whole thing was hand-lettered, and I should probably be impressed. But to me, it is the visual equivalent of bad potpourri. A culinary bed and breakfast with stiff, frilly pillowcases…plus an annoying hausfrau who will not stop nattering on.

I’m sure there is lots of useful information and some tasty recipes buried in there somewhere. When my kids go off to college, I’ll take that thing down and read it cover to cover. In the meantime, though…I hear there is a website entitled: WTF should I make for dinner? Now that might fit better with our current lifestyle.

p.s. Sorry, mom. I will admit the shepherd’s pie was fairly tasty.