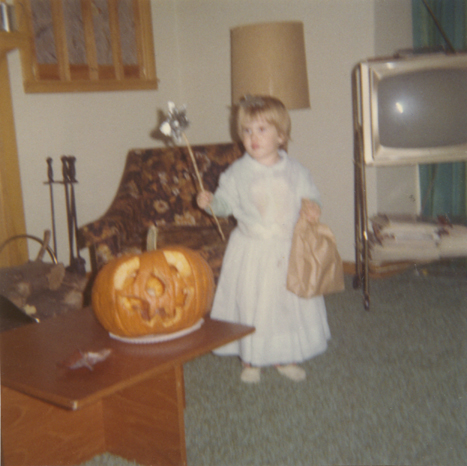 I wore the same fairy costume for four years running.

My getup consisted of someone’s worn and baggy blue dress, a cardboard tiara, and a star covered with Reynolds’ Wrap and taped to a piece of dowel.

Back then, the time change came earlier in the Fall, so it was nice and dark early on the big night. Unfortunately, it was also ridiculously cold, and because my parents loved me, I had to wear a coat covering my costume. They probably did not recognize this as the great disappointment it was, especially since everyone had seen my costume numerous times already.

I’m pretty certain my sister was asked to look after me, but what junior high student wants a baby sister tagging along with her posse after dark? Consequently, I had free reign of the neighborhood from a staggeringly early age, and my candy was only stolen once. No other tragedy befell me.

I would wander, giddy and anxious, mesmerized both by the boisterous clumps of people I wasn’t sure I knew, and by my paper bag, swelling with forbidden sweets. I would take them home and count them, chart them, graph them. I would eat two or three pieces, then squirrel the rest away, doling it out so it would last until Easter–the next time we got a statistically significant dose of sugar.

Once I got a bit older, I branched out and tried new costumes, always outdone by the girl who lived catty-corner from us. How did she predict my costume three years in a row? My mummy costume was made out of an old sheet torn into strips, and held together by an array of safety pins. It drooped and exposed my sweat pants in embarrassing patches. Julie’s father was a doctor, however, so hers was made out of surgical wrapping that clung magically to her gloating face.

Multiply that stinging feeling by all three years. I suppose I would have developed lingering unpleasant feelings about the holiday were it not for the Halloween party we had in our basement the year I turned eleven.

In my opinion, all basements are inherently cold and creepy, and ours was no exception. Scariest of all was the storage room, with concrete walls and floors, and rickety metal shelving loaded with spider webs and long-forgotten boxes. We shoved a few things out of the way so we could guide blindfolded kids one at a time into its clutches.

Perched here and there on the shelves were a variety of bowls into which we plunged their unseeing hands. One held eyeballs, or peeled grapes, and another brains, which was clammy cooked spaghetti.

Once a year, my parents purchased a side of beef, which was cut and meticulously wrapped and nestled in the extra fridge in the basement–the one without a handle, that we wrenched open with a dish towel and a finely choreographed hip maneuver. We had no shortage of strange cow parts in the basement freezer, so we thawed a variety of organs to fill the other bowls.

Given the location and ingredients, I suspect that our haunted house would have been just as creepy without the blindfold. And though this may reflect poorly on me, I reveled in the yelps and screams of our guests, and later, their wide-eyed wonder when we revealed the bowls’ actual contents. I think most of them had hoped that what we passed off as a heart might not really be a heart.

The piece de résistance of the evening was the Ghost Cake with Flaming Eyes, however. I remember so clearly that feeling of triumph when we turned out the lights again and lit the eyes.

Ever since that night, Halloween has been my favorite holiday.

I wrote a whole post about my Ghost Cake on LobeStir. Here’s the link–you could make one, too!